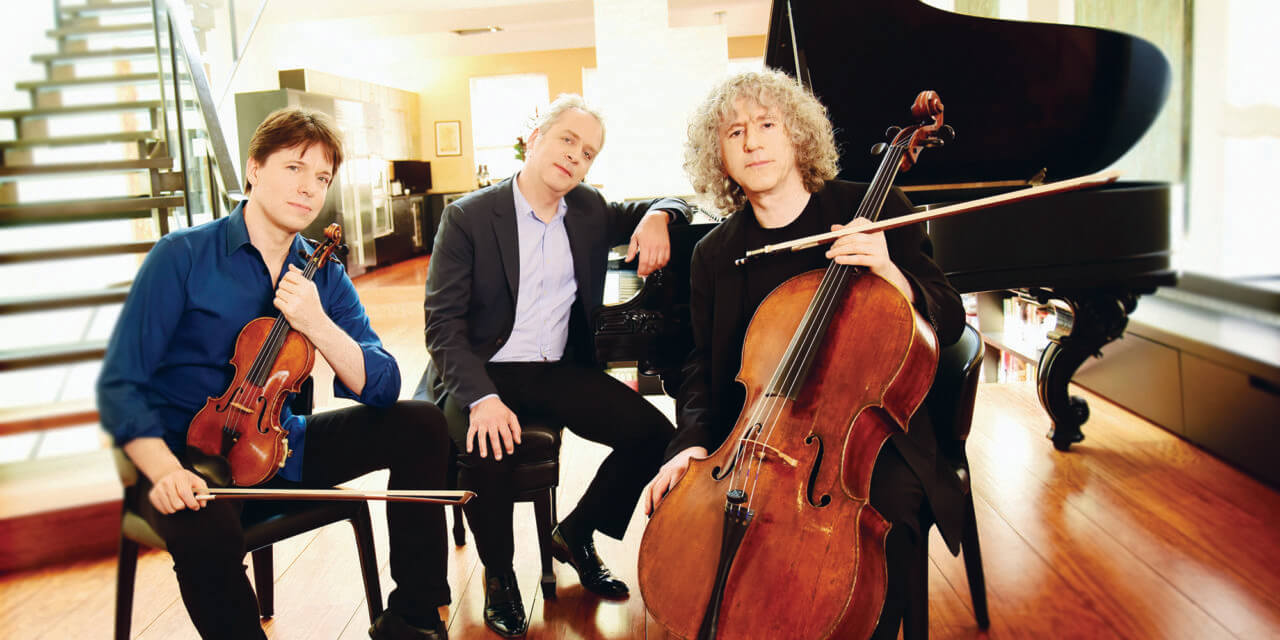 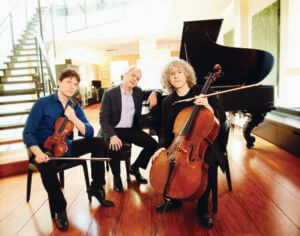 The Philharmonic Society of Orange County is pleased to present a musical dream team of performers as longtime musical collaborators and friends, violinist Joshua Bell, cellist Steven Isserlis and pianist Jeremy Denk, unite to perform hallmarks of the trio repertoire on Thursday, May 9, 2019, 8pm, at Renée and Henry Segerstrom Concert Hall, Segerstrom Center for the Arts. Though Bell, Isserlis and Denk have previously released the landmark 2016 recording For the Love of Brahms together on Sony Classical, this spring 2019 tour marks the first occasions in which the three musicians will tour live as an ensemble. The trio will perform Mendelssohn’s Piano Trio No. 2, Shostakovich’s Trio No. 2, Rachmaninoff’s Trio élégiaque, and Ravel’s Trio in A minor. A pre-concert lecture by Brian Lauritzen will begin at 7pm. This concert is part of the Elizabeth & Henry Segerstrom Select Series sponsored by Elizabeth Segerstrom, and the Laguna Chamber Music Series sponsored by Sam and Lyndie Ersan.
With a career spanning more than 30 years as a soloist, chamber musician, recording artist, conductor, and music education champion, Joshua Bell’s curiosity and clarity of insight are a testament to his belief in the power of music as a unifying cultural force. An artist of precision and passion, Bell is committed to the violin as an instrument of expression and a vehicle for realizing the new and unexplored. A Sony Classical artist, Bell has performed on six continents with every major orchestra in the world, and​ recorded more than 40 CDs garnering GRAMMY, Mercury, Gramophone, and OPUS Klassik (formerly ECHO Klassik) awards. Named Music Director of the Academy of St Martin in the Fields in 2011, he is the only person to hold this post since Sir Neville Marriner formed the orchestra in 1958. Bell performs on the 1713 Huberman Stradivarius violin.
Steven Isserlis enjoys a uniquely varied career as soloist, chamber musician, educator, author and broadcaster. He appears with the world’s leading orchestras, performs with many period instrument ensembles, and works with many contemporary composers. Unusually, he also directs chamber orchestras from the cello. His huge discography includes the Bach Suites, Beethoven’s complete cello music with Robert Levin, the Brahms Double Concerto with Joshua Bell and the Academy of St Martin in the Fields, concertos by Haydn and CPE Bach with the Deutsche Kammerphilharmonie Bremen, a special WW1-inspired disc with Connie Shih, Chopin and Schubert withDénes Várjon, and a new disc of Shostakovich and Kabalevsky with Olli Mustonen. which entered the official UK Classical Chart at No.1. He has written two children’s books about the lives of the great composers and, with composer Anne Dudley, created three musical stories for children as well. A commentary on Schumann’s Advice for Young Musicians was published in September 2016. For the past 20 years he has been Artistic Director of the International Musicians Seminar at Prussia Cove, Cornwall. He performs on the 1726 Marquis de Corberon (Nelsova) Stradivarius, loaned to him by the Royal Academy of Music.
One of America’s foremost pianists, Jeremy Denk is the winner of the MacArthur “Genius” Fellowship and the Avery Fisher Prize, and was recently elected to the American Academy of Arts and Sciences. Denk returns frequently to Carnegie Hall and has appeared in recent years with the Chicago Symphony, New York Philharmonic, Los Angeles Philharmonic, San Francisco Symphony, and Cleveland Orchestra, as well as at the Royal Albert Hall as part of the BBC Proms. Denk is known for his original and insightful writing on music, which Alex Ross praises for its “arresting sensitivity and wit.” His writing appears in The New Yorker and The New York Times, and he is working on a book to be published by Random House.
Segerstrom Center for the Arts, Renée and Henry Segerstrom Concert Hall, is located at 615 Town Center Drive, Costa Mesa, CA 92626. Ticket prices start at $38 and are available at the Philharmonic Society box office at (949) 553-2422, online at www.PhilharmonicSociety.org, and at the Center box office at (714) 556-2787. A limited number of box seats are also available for purchase. Call for pricing and availability.
Tickets are also available at the Center’s box office at (714) 556-2787.
INFORMATION:     Call (949) 553-2422 or visit www.PhilharmonicSociety.org

This legal notice expires, and will be moved to the archive, on Friday May 10th, 2019.