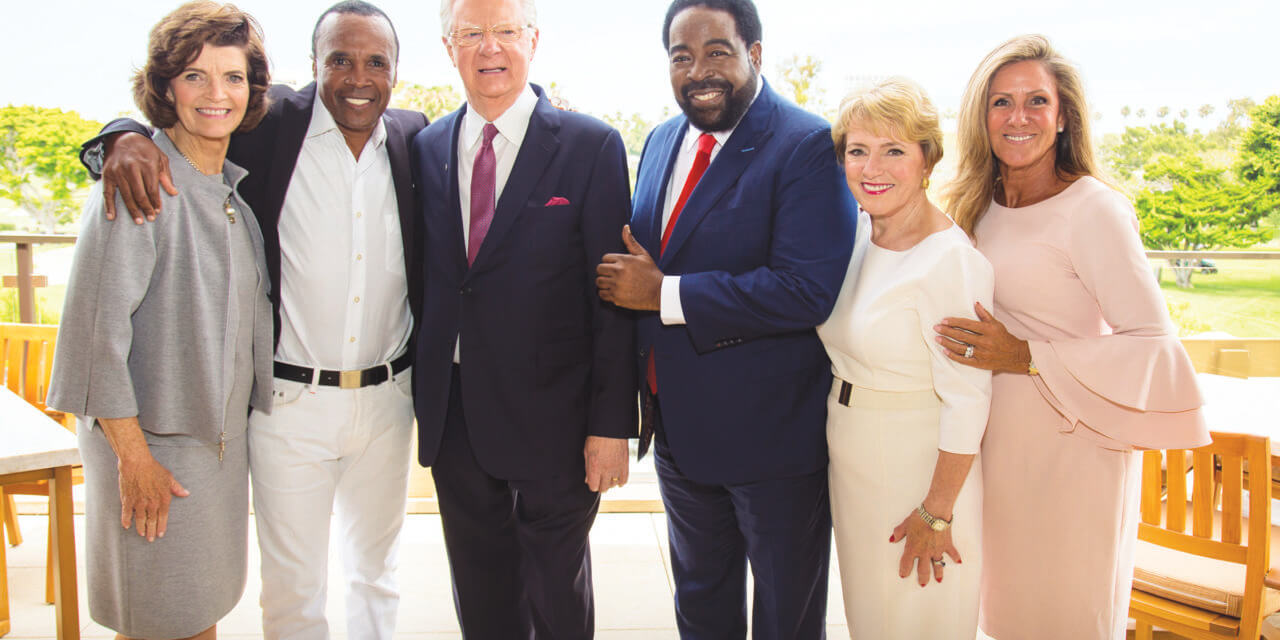 World’s Greatest Motivators will be aired in January 2020, on National and International TV Broadcasts to over 370 million household viewers via WGN America, Fox Sports West, Biz TV Network, Family Channel, Comcast Michigan & Indiana, Xfinity, Action TV, and other Networks and Streaming Channels.
Lynn Kitchen and Julie Hamilton, of Kitchen Hamilton Productions along with David Meltzer of Meltzer Enterprises, announce the second filming in the series of World’s Greatest Motivators, a LIVE TV taping in front of a studio audience. The filming will be at The Balboa Bay Resort in Newport Beach, California, November 13 and 14, 2019.
The live filming features world-renowned motivational speakers such as: Jack Canfield, Lisa Nichols, John Assaraf, Dr. Rev. Michael Beckwith, Sharon Lechter, Blaine Bartlett, Cynthia Kersey and more, plus Brian Tracy via a special viewing of a previously filmed segment introduced by Speaker Erik Swanson. Our first filming was successfully filmed in front of a full audience who were inspired by motivators such as Bob Proctor, Les Brown, Mary Morrissey, David Meltzer and special guest motivator, Sugar Ray Leonard,” said Hamilton.
The Balboa Bay Resort will be hosting this exclusive filming with a limited number of tickets available for the live television audience. “We expect another empowering 2-day filming in which the Unstoppable Foundation will receive a percentage of profits from the production. The audience will be inspired and motivated in this elegant setting, which I believe will create an unforgettable experience for all!” Hamilton continued.
The Unstoppable Foundation is a non-profit humanitarian organization bringing sustainable education to children and communities in developing countries, thereby creating a safer and more just world for everyone.
The 2-day filming lineup include these internationally acclaimed, seasoned motivators:

Jack Canfield:
Jack is the beloved originator of the Chicken Soup for the Soul® series, which has more than 250 titles and 500 million copies in print in over 40 languages. He holds the Guinness World Record for having seven books on the New York Times best-seller list at the same time.
Lisa Nichols:
Lisa is a celebrated motivational speaker who has inspired millions through her seminars and her role as a featured teacher in the movie, The Secret (2006). She is a best-selling author and a noted media personality who has appeared on Oprah, The Today Show, Dr. Phil Show, The Steve Harvey, and Extra. Lisa’s non-profit foundation, Motivating the Teen Spirit, has inspired over 270,000 teens and prevented over 3,800 teen suicides.
John Assaraf
John is founder and CEO of NeuroGym, teaching advanced, evidence-based brain training methods. He has built 5 multimillion-dollar companies.

Brian Tracy
Brian is CEO of Brian Tracy International, a motivational public speaker and a self-development author. He has consulted over 1,000 companies and has addressed over five million people.
Dr. Rev. Michael B. Beckwith:
Dr. Beckwith is the founder of the Agape International, he founded Agape’s outreach programs The preservation of the planet’s environmental resources, and globally build and support orphanages whose children have survived the ravages of war and AIDS.
Blaine Bartlett
Blaine is the President and CEO of Avatar Resources, Inc., with offices in four countries. Blaine is an Associate Professor at China’s Beijing University and considered a major innovative voice in the areas of leadership development.
Sharon Lechter
Sharon is a world renowned speaker and bestselling author as well as an expert in financial literacy and entrepreneurial success. Sharon co-authored Rich Dad Poor Dad and released 14-books in the Rich Dad Series.
Honoree

Cynthia Kersey
Cynthia’s mission is to ensure that every child on the plant receives access to the life-long gifts of education. Cynthia is founder of the Unstoppable Foundation, a non-profit humanitarian organization bringing sustainable education to children and communities in developing countries, thereby creating a safer and more just world for everyone.
Paisley Demby
Paisley Demby, Master of Ceremonies, is a highly sought after Speaker and Executive Coach and he is the first Business Services Director to serve in the Goldman Sachs 10,000 Small Businesses Initiative.

This 2-day filming includes the world’s top motivators and an elegant gourmet lunch with multiple stations and choices for a variety of food preferences.
One full day or two full day passes are available with a gourmet lunch and the added bonus on November 13th of a Private Networking Party on the bay. Guests will enjoy a live band under the stars at this enchanted social gathering along with networking opportunities, no host cocktails, hors d’oeuvres and special guests.
For tickets to this exclusive filming and to be part of the live television audience, go to: http://www.worldsgreatestmotivators.com./

This legal notice expires, and will be moved to the archive, on Monday November 18th, 2019.